Nearly half of mothers in the U.S. are their households’ primary breadwinners.1 Yet only 14% of women are very confident they will have enough money to maintain their lifestyle once they retire.2

Although more women are providing for their families, when it comes to preparing for retirement, they may be leaving their future to chance.

The reason behind this disparity doesn’t seem to be a lack of education or independence. Today, women are more likely to go to college and graduate school than men. And they’re more likely to graduate.3 So what keeps them from taking charge of their long-term financial picture?

One reason may be a lack of confidence. One study found that, although 83% of women want to be more involved in their finances, only 37% felt confident about handling retirement planning on their own.4 Women may shy away from discussing retirement because they don’t want to appear uneducated or naïve and hesitate to ask questions as a result.

Since Wall Street traditionally has been a male-dominated field, women whose expertise lies in other areas may feel uneasy amidst complex calculations and long-term financial projections. Just the jargon of personal finance can be intimidating: 401(k), 403(b), fixed, variable.5 To someone inexperienced in the field of personal finance, it may seem like an entirely different language.

But women need to keep one eye looking toward retirement since they may live longer and could potentially face higher health-care expenses.

If you have left your long-term financial strategy to chance, now is the time to pick up the reins and retake control. Consider talking with a financial professional about your goals and ambitions for retirement. Don’t be afraid to ask for clarification if the conversation turns to something unfamiliar. No one was born knowing the ins-and-outs of compound interest, but it’s important to understand in order to make informed decisions.

Compound interest may be one of the greatest secrets of smart investing. And time is the key to making the most of it. If you invested $250,000 in an account earning 6%, at the end of 20 years your account would be worth $801,784. However, if you waited 10 years, then started your investment program, you would end up with only $447,712. 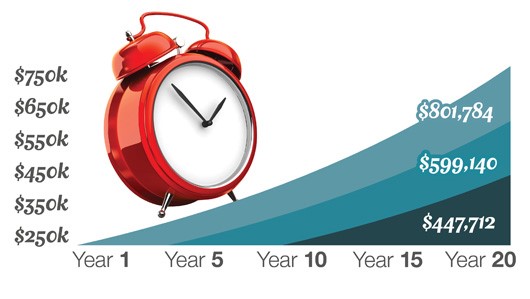 This is a hypothetical example used for illustrative purposes only. It does not represent any specific investment or combination of investments.

Sign up for a periodic newsletter with our most recent news items. No spam, just the info you want.

To find out more about our workshop programs - where, when, what and how, please go to our programs page.